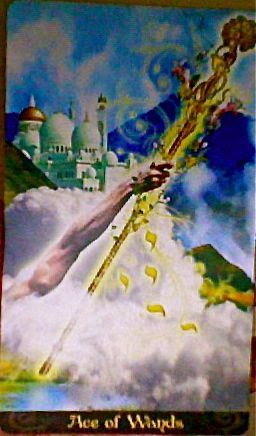 Aces are equivalent to the number 1 and as such indicate very initial beginnings and are very powerful and forceful.  Aces are also raw expressions of the element that they represent.

Ace of Wands are  part of the Suite of Wands and its element is fire, therefore,  the Ace of Wands represents the purest form of fire.

When the Ace of Wands appears in a reading…… It’s a Go!

When the Ace of Wands appears reversed, it can indicate that plans have not worked out could be because that’s how the cookie crumbled or that there were too may irons in the fire.

What are your thoughts on the Ace of Wands?

Posted in Suit of Wands

The queen  of wands is a court card.  Court cards are part of the minor arcana and can be very difficult to decipher as they can represent many things such as personality traits of the querent,  the person the querent is inquiring about, various situations, and the elements of their suit.

The element for wands is fire.   I will discuss court cards in greater length in a separate  blog.

The queen of wands is very energetic,  extroverted and self confident.  She possesses a great deal of strength and exudes  sexual energy.  Her wand and sunflower indicate her connection with divinity while  her black cat symbolizes her knowledge of supernatural powers.

The queen of wands when it appears in a reading asks the querent to be bold in all endeavors as they  have a clear direction of where they  are headed.

When the queen of wands appears reversed in a reading, it can represent a powerful female rival in the querent’s life.  In addition, it can also indicate that  too much opposition in life has caused the querent to develop a nasty streak which caused them to develop manipulative, deceitful, jealous and bitter characteristics.

Posted in Suit of Wands

A journey of spiritual development with a few twists and turns