Tag Archives: The Five of Wands

The Five of Wands 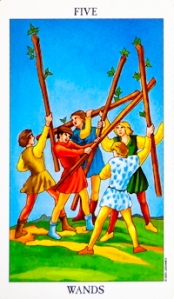 How doe this apply to me as the card of the day. I’ve been experiencing some problems at work which are due to competition.  It’s nice to know that the competition is in good spirit and that the people aren’t really out to hurt me.  What does the Five of Wand mean to you?

Posted in Card of the Day

Tagged The Five of Wands

A journey of spiritual development with a few twists and turns